You are at:Home»SHoWbiz»Yvonne Nelson called out for sharing an old photo of Dumelo kissing her

Actor and politician, John Dumelo, turned 38 years on Thursday, February 3, and to celebrate him, Yvonne Nelson published an old photo that has attracted backlash from Twitter users.

The movie producer who describes John as her ‘bestie’ decided to cause a stir by sharing a popular photo of herself and the actor which back in the day sparked dating rumours.

A claim both actors have denied.

In the said photo, the two were captured in each other’s embrace, with John planting a kiss on her left cheek.

According to tweeps, the photo used by the actress on John Dumelo’s birthday was ‘inappropriate’ because he is now a married man with a child.

Others posited that John Dumelo’s wife, Gifty Mawunya Dumelo will be appalled when she comes across the post that has attracted over 130 comments from Twitter users.

Reacting to the post, controversial blogger, Albert Nat Hyde alleged that there was more between the two actors. He wrote: “You guys did this and more…”

Another, Quesi Bronu wrote: “Yvonne he get wife oo. Put another pic here wai and delete this one.”

A third, Cypher also found everything wrong with the photo shared by Yvonne. He quizzed: “So as u post pic like this, u forget say the person marry?”

Read the reactions below: 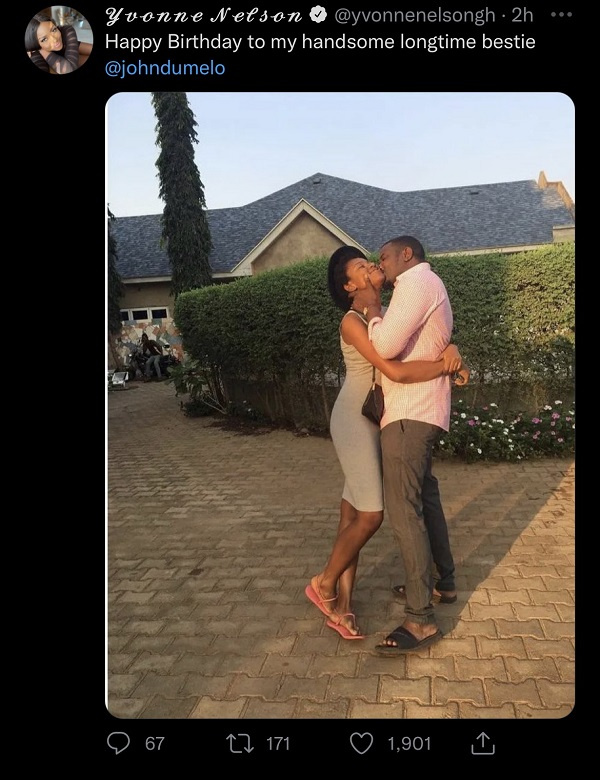