The Chief Executive Officer (CEO) of Africa Integras, Andrea Pizziconi, has backtracked on her earlier accusation which suggested that the Vice-Chancellor (VC) of University of Ghana (UG), Professor Ebenezer Oduro-Owusu, sexually harassed her.

According to her, the Professor never harassed nor did she ever say in her earlier tweet that she was harassed.

She rather described Prof Oduro-Owusu as a misogynist, who thinks that she used her womanly prowess to secure the US$64m infrastructure investment at the university campus.

In a series of tweets, Andrea Pizziconi wrote “I agree that you never harassed me. Nor did I ever say as much…..Of course, I requested that we meet alone to discuss the project at least once during the various stages of the two years when we tried to help you remedy your willful default on the project… It seems you may have thought that I wanted to meet you alone for the devilish reasons that you suggest and that you implied that day in the Council meeting (with the former VC present rather than myself) when you suggested that I used my womanly prowess rather than my brain and unique expertise in university development to close this monumental project.”

In what she described as blasphemous press releases, Ms Pizziconi claims the VC passionately and bizarrely insinuated these allegations which extensively questioned her credibility, and EOCO investigations against the former VC and herself were attempts to prove that anything other than the merits of the project’s vast benefits were at the heart of the decision to advance the project into construction.

“These efforts have yielded not a shred of evidence that any stakeholder has acted in any untoward way to execute the project. There is, however, the obvious fact of my credibility that the buildings (and the tens of millions of dollars in investment they represent) are there on the ground for anyone to inspect. In short, I delivered on my obligations for the project,” her post reads on.

Andrea Pizziconi stated further that the VC was thinking that she had some desire to influence him in any other way than with merits of the facts of the project’s benefits, that is why she made her earlier statement.

“The issue of sex for grades and the dismissal of a significant development partner because the company happens to be led by a ‘far too pretty…’ CEO is related. It is long overdue that women are treated as serious business people (or serious students in the case of sex for grade) and not bodies of sex to be exploited or dismissed. Surely, you have met many businessmen one-on-one over the years. There is nothing inappropriate by such a request,” she noted.

The Africa Integras CEO earlier accused the Vice-Chancellor of University of Ghana of sexually harassing her.

She alleged in her tweet that the ‘sex for grade’ investigative piece that incorporated some lecturers at the University of Ghana resonates deeply with her.

She claimed that at a UG Council meeting in August 2017, the VC suggested that the contract which was signed between herself and the past VC was invalid “as it was signed under duress in a hotel room.”

“Nothing could have been further from the truth and in fact of all my dealings at UG and in Ghana it was this current VC who made me most uncomfortable,” she noted.

Andrea Pizziconi said Prof Oduro-Owusu declined to work with her to save the Africa Integras project on the basis that she was “far too pretty to worry my little head about the project, while declaring ‘turn around, everyone, I want to give her a proper hug’.”

In a response, Prof Ebenezer Oduro-Owusu said Andrea Pizziconi, is “desperate” and “bitter” because he renegotiated her company’s contract with the University of Ghana.

“We have never sat anywhere one-on-one because my policy is that we work as a team and, so, I don’t sit one-on-one with people and that is what she didn’t like.

“The last time she said she wanted to meet me one-on-one, I called the Registrar to join the meeting but when she realised that I was coming with others, she didn’t like that idea. I have never been in a secluded area with her – either in my house, office or hotel, never!”

Pls see my response to articles quoting the VC denying my earlier remarks on SM. To be clear, I never accused him of harassment.  Rather than chase me around a table, he refused to INVITE me to the table dismissing me instead as just a “pretty face”. Related issues, of course… 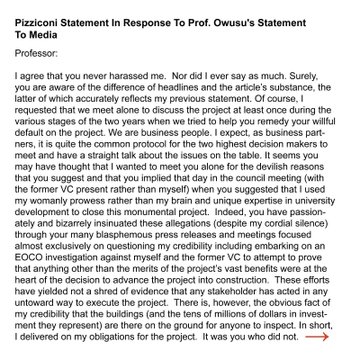 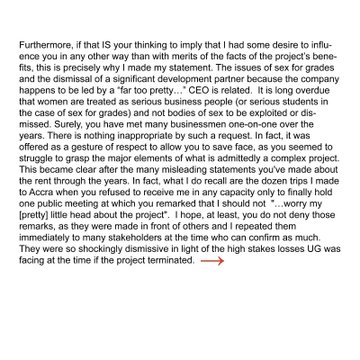 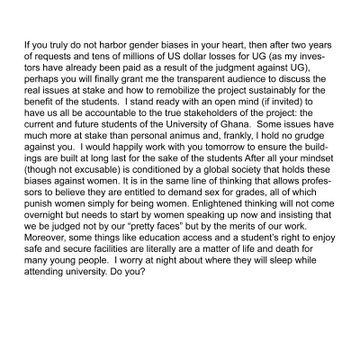