Monday, May 17
Trending
You are at:Home»NewsArchive»Sarkodie ‘runs away’ from ‘Nana Toaso’ comment

The song which is currently trending number one on YouTube is understood to be an endorsement to the Nana Addo Dankwa Akufo-Addo government because of the lyrics; as the rapper threw some jab to the opposition National Democratic Congress.

Sarkodie mentioned in the song that Akufo-Addo has not only implemented good policies, including Free Senior High School adding that the president solved the persistent, irregular, and unpredictable electric power outage canker.

“We all spoke against the dumsor and the high inflation rate and so if these have been solved at the moment with Ghanaians also enjoying free SHS, then all I can say is that Nana Akufo-Addo should continue for another four years,” he said in the song.

The song that has been interpreted as an endorsement song got the President to react with a re-tweet on his official Twitter handle saying: “Nice song @sarkodie and @KuamiEugene. Indeed, the battle is still the Lord’s. #4MoreForNana”

However, the rapper in a new Tweet has given a new twist to his ‘Happy Day Song’.

His tweet reads, “Nana M3nfa bronya ho nre akoko oo lool!!
“when I say aban (all parties ) Shouts to yourself x JM but if I feel like pointing out the negatives too you know how we do. #HappyDay ” 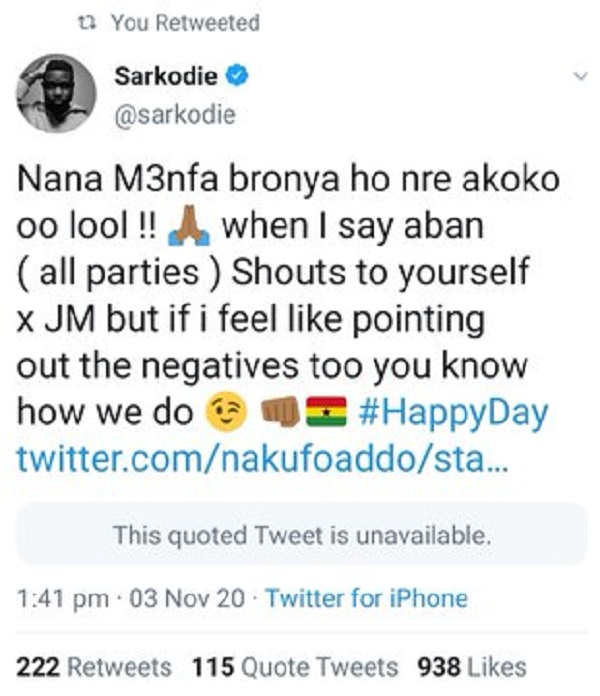