An ex-soldier and former Minister in the John Kufuor administration has argued against the possibility of a successful overthrow of the government.

According to Nkrabea Effah-Dartey, Ghana has “survived over 20 years of [continous]constitutional and democratic rule” and he doesn’t believe a coup can be successfully executed.

“I cannot appreciate a situation where anybody in his right senses will think he can successfully destabilise Ghana,” he told JoyNews’ PM Express programme on Monday, warning “any soldier listening” to “run away from the idea.”

Effah-Dartey’s cautions come in the midst of the government’s row with some military personnel, a doctor and other accomplices who have been accused of a conspiracy to destabilise the state.

A statement from the Information Ministry said the alleged conspirators under the guise of a medical facility, manufacturing guns.

The statement said the accused persons planned to target the Presidency. The security agencies have been surveilling the suspects for months, the statement added.

They have been arraigned before court on charges including unlawful manufacture of guns.

Scores of people, including former President and 2020 Presidential candidate of the NDC, John Mahama have laughed off the government’s claims.

Effah-Dartey who represents one of the accused soldiers says the officer is “emotionally suffering because…he is absolutely and completely innocent.”

“His father was an NPP Chairman so his commitment to the governing NPP administration is without question,” Effah-Dartey said. 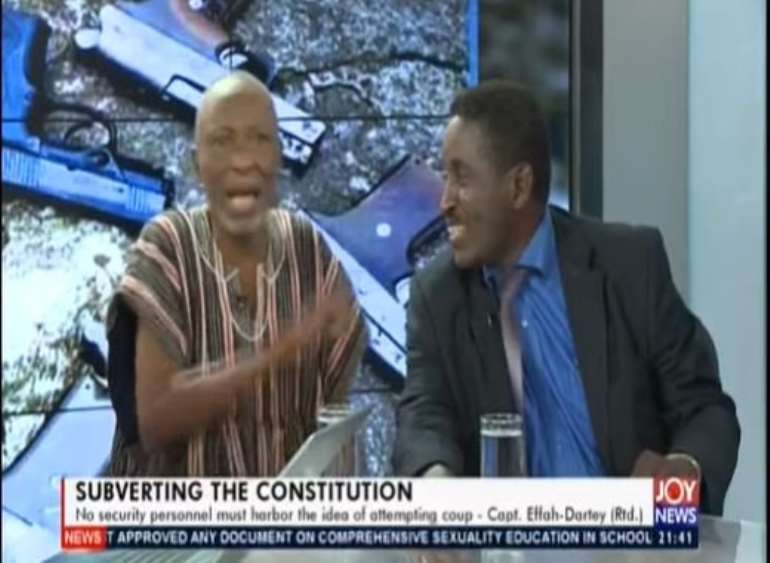 Boakye Gyan and Effah-Dartey appeared on the show on Monday

Maj. Osahene Boakye Gyan (Rtd) who was involved in the June 4, 1979, coup d’état that toppled another military regime disagreed with his co-ex-serviceman.

According to Mr. Gyan, Ghana’s democracy is still young and besides, “any state must assume that some people somewhere want to destabilise it.”

“That’s why we have security personnel to guard the state against aggression,” he said.

He, also, however, challenged the narrative that the accused persons could destabilise the state.

According to him, the suspects display no power of being able to move a battalion of soldiers to execute the said act.

Killing the President, he explained doesn’t qualify as destabilising the state, an example he said is the assassination of former US President JF Kennedy which did not destabilise the superpower.