Friday, July 30
Trending
You are at:Home»SHoWbiz»Controversy brews as Strongman clashes with Kweku Smoke over Sarkodie tweet

Strongman’s response to Kweku Smoke’s tweet which acknowledged the traits of Sarkodie has engendered controversy on social media as tweeps subject the reply to scrutiny.

Kweku Smoke, a rapper, had in a tweet hailed Sarkodie for refusing to be distracted by comments aimed at unsettling him. He mentioned that despite the incessant attempts by a section of the public to make Sarkodie look bad in the eyes of many, the BET Award winner who is affectionately referred to as ‘Highest’ has been focused and keeps supporting talents in diverse ways.

According to Kweku Smoke, if Sarkodie paid attention to such comments, he would not have promoted any song by Strongman who used to be on his [Sarkodie] label.

“I know the feeling highest but am happy you be one focused person you do what you want do for others regardless if Enoe be so like strongman e song sef unoe go tweet again..U follow Gh people aa somebody Dey die sef u go lef am make e die..we the young ones Dey appreciate u,” his Sunday tweet in pidgin read.

A furious Strongman replying the tweet said: “Fake people always trying to prove their loyalty outside. What you heard might even be the opposite of what happened Let this be the last time you drag my name in your useless arguments.”

I know the feeling highest but am happy you be one focused person you do what you want do for others regardless if Enoe be so like strongman e song sef unoe go tweet again..U follow Gh people aa somebody Dey die sef u go lef am make e die..we the young ones Dey appreciate u

2,133 people are talking about this

The response has left Twitter buzzing with a section of the tweeps suggesting Strongman’s remark shows how bitter he is while others say Kweku Smoke’s tweet was ambiguous hence, Strongman should not be faulted. Some are also calling for a lyrical war between the two yougnsters.

In 2019, however, Strongman exited after his two-year contract expired. The development triggered questions with some suggesting Sarkodie succumbed to pressure and criticisms of hindering Strongman’s progress.

“Nobody can block your shine, Sarkodie didn’t sign me to block my shine. Because Ghanaians know Sarkodie is a big brand and he signed me, many people thought things would happen soo quickly. I think we didn’t get to meet the fans expectation,” Strongman said that year.

Here are a few reactions to Strongman and Kweku Smoke’s brawl!

Massa na Wo don’t u see the tweet was ambiguous and could be concluded in both ways.Strongman could be mad cuz he might think Kwaku is after e brouhaha that surrounds hw he left Sarkcess. Home Econs n Visual arts Students trying to stress Strongman.Ad3n aa e tweet was harmless

He’s just tryna say if not for the good heart sarkodie got, like he will never help promote strongman’s songs if he listened to Ghanaians . What is wrong about that? Aah b3ma kumasifo) de3 Yene Abie ooh nti mongyae saa aah 3ny3 Guy koraa. Accra people will laugh at us ooh lol…

Your tweet doesn’t make sense. Sark already knows da fact and obviously the right person to know how to react to each Strongman’s projects. Ghanaians can’t lecture him cuz surely we were not there when they were into their dealings. Smokes comment should have not involved Strong!

Kweku Smoke sed if Sarkodie listened to what people said about him as strongman dey Sarkcess Music nd as he dey leave like He won’t still share strongman en works, that’s how I understand his tweet but strongman too go get different meaning to that tweet

I honestly don’t understand strongman o. I really don’t see anything wrong with what kwaku said. Ebi like he no dey like am already or he mean am already but if strongman go make this thing beef, we go drag am hard. Somebody come diss all rappers u act like u no dey Ghana ofui

Smoke claims Sark promoted Strongman even when he had no reason to… because apparently, they had beef

i think Strong is tryna say what actually happened between them is opposite to what the media portrayed so Smoke doesn’t even know what he’s talkin abt. Hence the anger https://twitter.com/kofi_seven/status/1254201496448708615 …

If no be personal issues wey Strongman get plus am. What be wrong about this tweet?
Tweaaa

Kweku Smoke could have made his point without adding Strongman ein name. But as Kumasi nigga I won’t love to see dem beef. Smoke o Strong o we move

The message from strongman shows there’s a problem n many will make news off it if he himself doesn’t make it straight, those outside fake love, Ebi r those?! Cuz the initial tweet was to support Sark initiative! https://twitter.com/gyaigyimii/status/1254191387920216064 …

What is happening between Strongman and Kweku Smoke too?? Ei 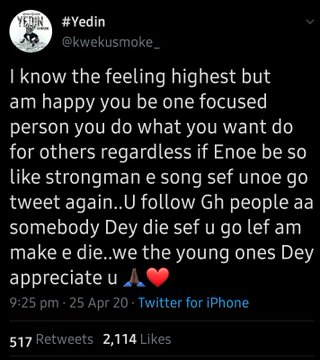 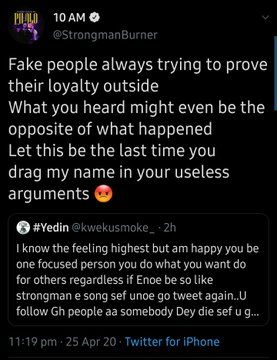 Is he going to substantiate the fact that there’s a squabble between the two?

Others are asking why he didn’t mention Akwaboah’s name but we know it’s Strongman’s issue that people and even the media used to denigrate Sark all the time. The post was talking about comments people made about his signing of Strongman and not what Strong has done

Bah on a more serious note if strongman and kweku smoke start demma beef who en side we go dey ??let be frank with dis

Hello Strongman k3 Kweku smoke
This one too shall pass okay 28 people are talking about this

@StrongmanBurner You claim to be a graduate but you lack intelligence, What Kweku Smoke Tweet Wasn’t Something bad… If you even have something with him off scene least dwag the tweet because he spit positive

As Kweku Smoke bi sarknative de3 u people are telling us Strongman doesnt understand English. But if it were some other rapper, u would have gladly hanged his head on the spike.